Today was a day off and we went for a picnic. At least that was what we were told we were going to do. Seven of us set off from Mokokchung on what can best be described as something of a trek. After an hour or so we went off-road and begin descending down a track hardly wide enough for a small car let alone our 4×4 van. We descended, and descended, and about half an hour later we reached the bottom of the valley in a remote place next to a pretty river. The location was idyllic! The Naga hills towering over us, and a rambling clear water river. What better spot for a picnic?

The first thing that made it an unusual picnic was the time, we had left early and arrived there about 10am. We were seven men, Peter, myself, Mayang, Moa’s cousin and three faculty from the college. As soon as we arrived, Moa’s cousin, ably assisted by one or two others, took machetes and quickly cleared the ground under some banana trees for us to shelter from the sun. Next they had made a fire to cook on between two sturdy logs and cut down from the incredibly versatile bamboo trees tubes to cook in. What I mean is this, they felled a thick bamboo trunk, chopped it up into even sized pieces (each about a meter long), and hollowed them out ready to fill with a dry chicken curry. This then sat in the open fire, each end stuffed with banana leaves. Sam, the academic dean from South India made his own (much hotter) curry more traditionally in a pot over the fire.  This was not like any picnic I could remember going on!

Next, a couple of them were shaking lime powder into the river. This killed the fish whose little corpses (similar to whitebait) would be then float to the surface and be scooped up. (What do you think of that Ashely? Try it back home?) Most of the team spent over an hour scavenging the river for them. 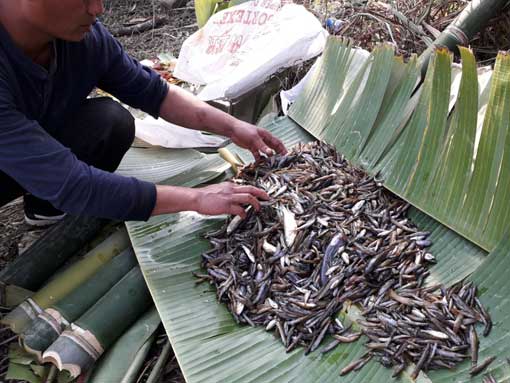 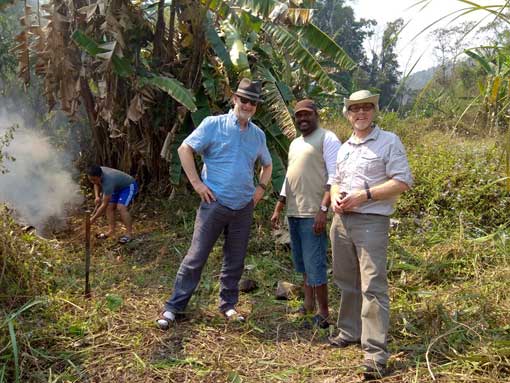 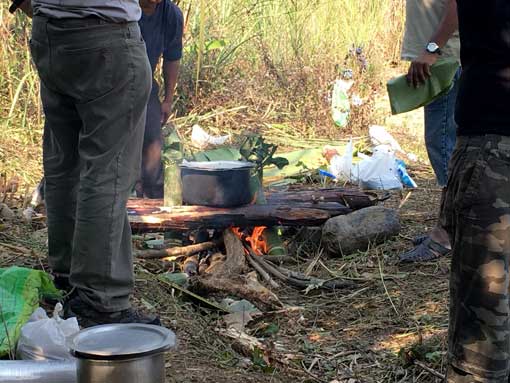 We collected a large quantity of fishes. However they weren’t to eat now, for while everyone else had been doing this two of the guys had expertly chopped up two chicken carcasses to make the mixture that was to go into the bamboo, with all the chillies and other spices one might expect. The chicken was a bit challenging for us, as there were bits of chicken in the curries that, shall we say, we wouldn’t normally see in England, even in Brick Lane. We ate what was put before us of course and all was well. Both dishes were interesting!

It was certainly a different sort of day, and good to be out in the free air in such a great place.

There are two church meetings tomorrow, I’m preaching at both, and Pete is going back Tuesday evening to take a further meeting with the second church we will be going to. 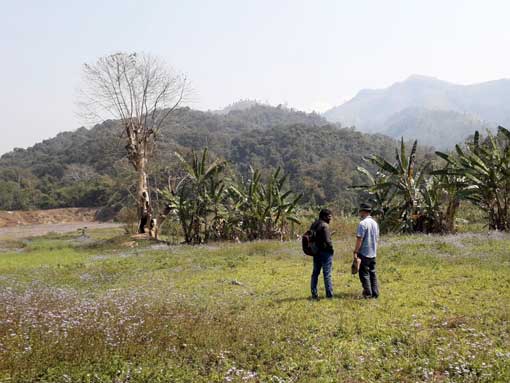