I emailed yesterday’s blog to Hedley before Peter had returned from visiting a bible study group at Christchurch, where we were on Sunday. He came back enthusing. Here is his brief report:

Yesterday I went to Christ Church in Mocokchong Nagaland. It was a great time sharing with young people at a bible study. With me were Ravish, Ranjeet and Aman from Bathinda, Punjab with me. We shared encouragement through personal testimony and the word. The Main point was that God encourages us through his word. The word was from Psalm 27 The Lord is my light and Salvation and also Ephesians and being seated with Christ in heavenly places. An opportunity was given for the people to come forward to receive encouragement from God and many came forward and received just that.

We then spent the evening in deep discussion with Senti and Moa who shared with us their strategic dilemma’s and challenges, and we talked around it and found some new ways of thinking about some of them. Senti very much is burdened to see the Pentecostal churches revived, for many have slipped back into nominal christianity and in some places are indistinguishable from the adjoining baptist churches, who historically have opposed revival, baptism of the Holy Spirit etc.

Today, we had another great time in the classroom! The students are clearly receiving much over these two weeks and, though they may not always show it on their faces, it is going in and they are appreciating very much the input from us. We are teaching what will help them after we have gone, principals of the spiritual life and of ministry.

I struggled today however, in the chapel time. I just didn’t seem to break through with them, and whereas this used to be something that happened commonly, and which I had to learn how to combat, in recent years it has never seemed to be difficult to do.  When the pray-ers messages came through later I realised that It wasn’t that I was doing anything wrong but that the message of Galatians 2.20, spoken of several times in recent days, was still needing to be driven home. The word from them was that this driving home was necessary and would prepare them for what was needed next.

And that is what happened. We had an evening meeting tonight and following lively anointed worship – not something we have seen here up to this point – it was ON THE CHAIR and sometime later  (quite a bit later) that evening everyone was duly standing on theirs.

When God first led me into the Ephesians study which later resulted in the short course, he told me I would be teaching it all over the world. Well, I’ve stood on my chair in Kenya, Rwanda, Uganda, UK, Chandigarh, Bathinda and, now, Mokokchung.  It was another powerful evening! It has been such a joy to return to places, sometimes years after, and hear how people have held on to that image of standing on their chairs, and used it to learn to live from that place God has put them, in Him, in heavenly plaes. 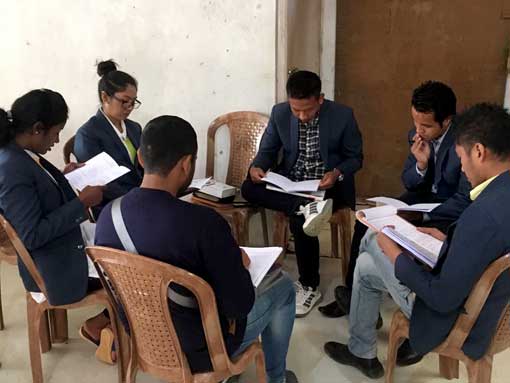 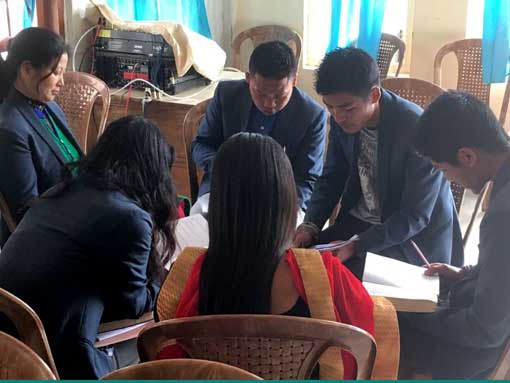